Since I began setting concrete reading goals in 2018, I was always able to meet and exceed those goals of around twenty books per year. In the past couple of years, I even felt that I was setting a pretty low bar for myself and that I should increase the number. But last year I failed to even meet my typical twenty-two-book goal, having only read sixteen books by year’s end. I’m not trying to make excuses for my shortcoming here, but my reading habit fell by the wayside in the summer due to my move to Colorado and a new job. I also read a few big novels which took me a long time to get through. 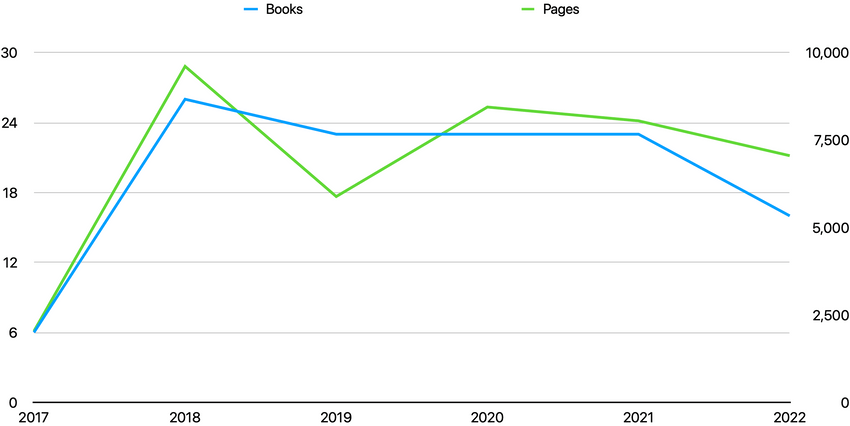 While I did not meet my expectations for the amount of reading, I did better at my other goals: to read more fiction and physical books. Last year I read six novels which made up 38%1, a healthy jump from recent years. And all but one book I read last year were physical books. 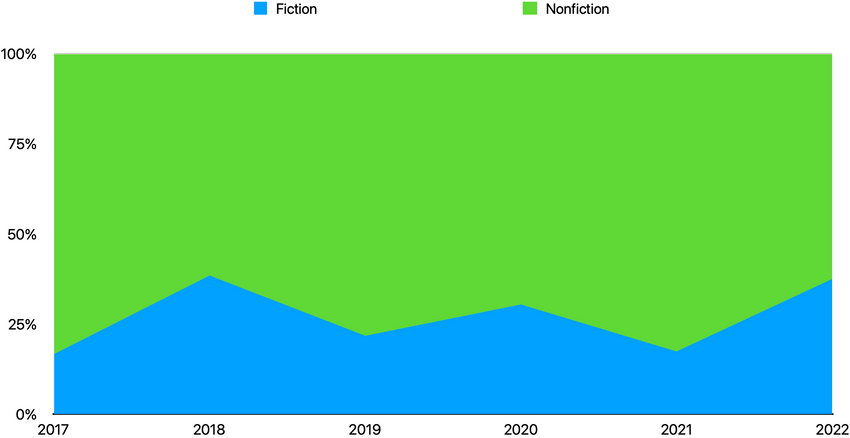 On the topic of physical books, last year I also set a goal to stop buying books and focus on reading the ones I already owned to eliminate unread books on the shelves. So how did I do with that goal? Well I definitely did not stop buying books and ended up adding nine more books to my library2. But I did pare down the number of unread books by reading seven out of eight I had at the start of 2022. Accounting for new books I bought and haven’t read, the number of unread books is now down to five. I was on track to complete this goal by having already read those seven unread books by the summer, but I lost sight of that and ended up buying and reading new books from then on. We’ll revisit this again and see how I do with this in 2023.

Anyway, enough with all the numbers. Here are the top five books I read in 20223. 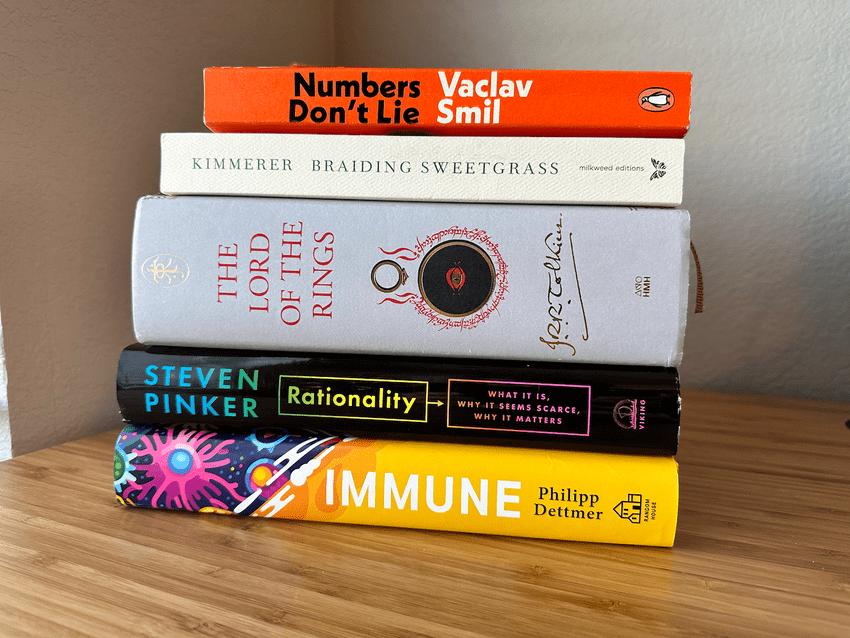 This came as no surprise to me. I love the Peter Jackson’s films and have watched them through many times but I never read the book. Going into this already knowing all the main story beats did not take away from my enjoyment of the book. I was enthralled from start to finish and there was rarely any dull or slow moment. For years I had been avoiding reading this as I had this preconceived notion that it was going to be difficult to read and the plot would proceed at a glacial pace, and that it would take me months to get through it. I was happy to not find that to be the case.

"I wish it need not have happened in my time," said Frodo. "So do I," said Gandalf, "and so do all who live to see such times. But that is not for them to decide. All we have to decide is what to do with the time that is given us." (p. 51)

You normally wouldn't find me reading a book about botany or indigenous experiences but putting those two together and combine with the author's background as a scientist made me curious enough to check it out. And I'm really glad I did.

In this book, she tells stories from her life and work as a botanist and member of the Citizen Potawatomi Nation while interleaving with insights into indigenous ways of thinking about ecology and other species on this planet. Her writing really shows off her deep love for nature and the land. I loved when she talks about how the scientific community generally ignore and look down on indigenous knowledge but they are often proven wrong, as told in her discussions of sweetgrass thriving more if harvested and trees talking to each other. A constant theme throughout the book is the emphasis on the importance of generosity and gratitude for what the land gives us, and the responsibility we bare as a species benefiting from — or, more accurately, exploiting — that generosity. It wasn't the easiest read, certain chapters could be quite a slog, but the perspectives I gained from this book really made this worth the read.

In the Western tradition there is a recognized hierarchy of beings, with, of course, the human being on top—the pinnacle of evolution, the darling of Creation—and the plants at the bottom. But in Native ways of knowing, human people are often referred to as “the younger brothers of Creation.” We say that humans have the least experience with how to live and thus the most to learn—we must look to our teachers among the other species for guidance. Their wisdom is apparent in the way that they live. They teach us by example. They’ve been on the earth far longer than we have been, and have had time to figure things out. (p. 9)

Rationality: What It Is, Why It Seems Scarce, Why It Matters by Steven Pinker (2021)

I read both The Better Angels of Our Nature and Enlightenment Now, and personally found his writing style and topics right up my alley. Rationality is a follow-up to the series and it takes a deep dive into rationality and related fields of study. A large part of this book reads like a college textbook and requires intense focus. The chapter on logic — with discussions of concepts like truth tables and "modus ponens" — took me back to my freshman year when I took "Intro to Logic" course. Same thing can be said with most of the other chapters covering probability, Bayesian reasoning, statistical decision theory, game theory, and more. Surprisingly, I still found reading those chapters engaging as I tried to keep up with them.

After nine highly technical chapters, the last two discuss the effects rationality, or the lack thereof, have in our society. He discusses conspiracy theories and offers psychological and sociological explanations into why people believe them and how they seem so widespread in today's hyperconnected world. This book is not what I expected going into it but it still taught me so much in the end.

The dream at the dawn of the internet age that giving everyone a platform would birth a new Enlightenment seems cringeworthy today, now that we are living with bots, trolls, flame wars, fake news, Twitter shaming mobs, and online harassment. As long as the currency in a digital platform consists of likes, shares, clicks, and eyeballs, we have no reason to think it will nurture rationality or truth. (p. 316)

Immune: A Journey into the Mysterious System That Keeps You Alive by Philipp Dettmer (2021)

Overall a very informative and approachable book for such a mindblowingly complex subject. The text is easily digestible and engaging in the Kurzgesagt style I’ve come to know and love. Throughout the book he uses a lot of analogies to illustrate scale or purpose of certain features of the immune system like helpful bacteria living on our skin as barbarian horde outside of the gates, the lymphatic system as superhighways and megacities, and the flu virus as soldiers in the Trojan horse. Some chapters can be long and involve multi-step in-depth explanations, but he also does not shy away from shorter chapters when the topics require it. Highly recommended for those wanting to get a better understanding of such a critical part of you staying alive.

Right now your Adaptive Immune System has a specific weapon against every possible enemy in the universe. For every single infection that has ever existed in the past, for all of them in the world right now, and for every single one that might emerge in the future but does not even exist yet. In a way, the largest library in the universe. (p. 103)

This book is a collection of essays the author originally wrote for the IEEE Spectrum magazine which are grouped into seven main themes: people, countries, inventions, transportation, food, and environment. Full of numbers and graphs, this is a very fact-based book with no lengthy philosophical ruminations. The chapters are all succinct with no more than a few pages each which made for a quick and easy read. I cannot count how many new facts and understandings I gained from this book as it covers such a wide range of topics. Some really interesting ones are: why electric container ships are still not viable, diversity of animals vs. human-made artifacts, rational meat-eating, and better home insulation4.

Human minds have many irrational preferences: we love to speculate about wild and crazy innovations but cannot be bothered to fix common challenges by relying on practical innovation waiting to be implemented. Why do we not improve the boarding of planes rather than delude ourselves with visions of hyperloop trains and eternal life? (p. 136)