A couple of years back, I rediscovered the joy of reading physical books after having exclusively been buying ebooks for years prior. Since then I had bought more and more books, which filled up my bookcase faster than I could read them. So in an effort to not have shelves full of books I haven't read, I made a decision to suspend all my book buying activities until I clear out those I had piled up. Therefore a lot of books I read in 2021 were from this backlog, and this will remain the case going into 2022.

Below are five books that made my 2021 top list, ranked by how long it took me to read from shortest to longest.

Conditional Citizens: On Belonging in America by Laila Lalami (2020) 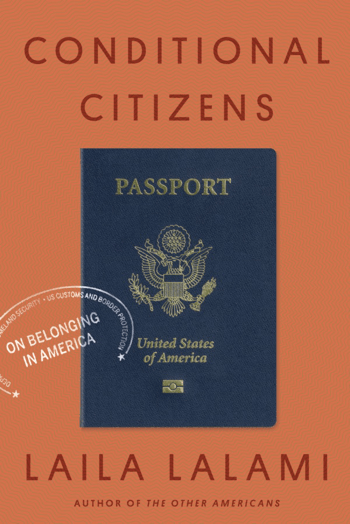 In this book Laila Lalami covers her experiences of being a neutralized US citizen and points out the various contradictions and ways immigrants are treated unfairly in the US. She shows how non-white citizens still face challenges and prejudices in this country despite the fact that they should have the same rights and privileges as any other citizen. As a person of color and noncitizen living in the US, it wasn't hard for me at all to relate to her stories and essays.

One starkly revelatory point she made was how the US labels its non-white citizens. Even after years or decades of assimilation and generations later, they are still labeled as hyphenated Americans such as Mexican-Americans or Chinese-Americans. But descendants of white immigrants are simply referred to as Americans and not English-Americans, French-Americans, etc.

This is a poignant book everybody should read to get a better view into the immigrant experience and what it means to be a conditional citizen in the US.

a white woman told McCain that “I can’t trust Obama. I have read about him, and he’s not, he’s not, he’s a—an Arab.” “No, ma’am,” McCain replied, taking away her microphone. “He’s a decent family man, a citizen that I just happen to have disagreements with on fundamental issues.”

The woman said Obama couldn’t be trusted because he was an Arab, and the rebuttal wasn’t about the lack of causality between the two; it was a reassurance that he wasn’t Arab, he was a family man. The second contradiction was between being “an Arab” and being “a citizen.” Clearly, Obama could only be the latter if he was not the former. (p. 17-18)

The End of Everything (Astrophysically Speaking) by Katie Mack (2020) 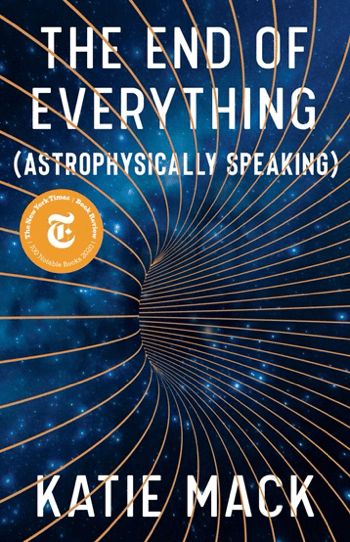 Cosmology and astrophysics have always been subjects that captured my imagination since I was a kid. But as just a layperson, I find the subjects exceedingly difficult to get into with all of the advanced mathematics and equations. I've read quite a few popsci astrophysics books like Stephen Hawking's A Brief History of Time and Michio Kaku's Parallel Worlds, which truthfully were not light and easy reads for me. But The End of Everything by Katie Mack provided a refreshing perspective on the genre.

This book addresses the topic of how the universe could end, where most popular science media and discussions on astrophysics I've come across usually focus on the beginning. We all know that the Earth and all of its inhabitants will die a fiery death when the sun eventually engulfs us in five billion years. But Mack isn't interested in our insignificant rock's end and instead presents us with five ways the universe as we know it could meet its demise. With enthusiasm and humor, she takes you on a journey through each of them with all the astrophysics and quantum mechanics nitty-gritty details (some of which were not easy to grasp, I must admit). My personal favorite of the bunch has to be the incredibly anxiety-inducing vacuum decay with the expanding "quantum bubble of death" traveling at the speed of light destroying everything in its path by taking apart all of the elementary particles that are held together.

Being quite a short book with just over two hundred pages, it is by no means lacking in substance. She just doesn't go off on tangents and remains straight-to-the-point which was one of the reasons that made this book an enjoyable read to me. I highly recommend it for any space nerd out there.

Something coming at you at the speed of light is invisible — any little glint warning you of its approach arrives at the same time as the thing itself. There is no possible way to see it coming, or even to know that anything has gone wrong. If it approaches you from below, there will be a couple of nanoseconds during which your feet no longer exist while your brain still thinks it is looking at them. Fortunately, the process is also entirely painless: at no point will your nerve impulses be able to catch up with your disintegration by the bubble. It's a mercy, really. (p. 145)

The Anthropocene Reviewed by John Green (2021) 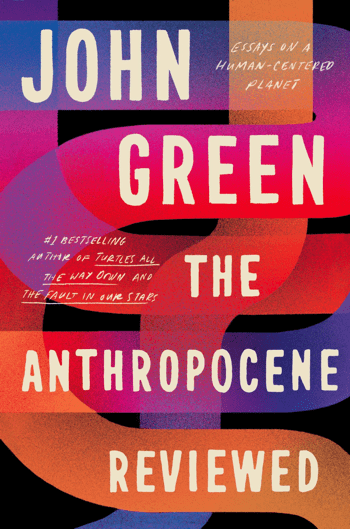 I am no stranger to John Green as I've been a dedicated vlogbrothers viewer for years. But I've only read two other of his books: Looking for Alaska and Turtles All the Way Down. Though young adult genre isn't really my cup of tea these days, I nevertheless still find myself drawn to his writing, not for the plot or romance aspects, but for his nuggets of wisdom and ways of looking at the world. That's why I was so excited for The Anthropocene Reviewed, his first nonfiction book1.

This book is a collection of essays, adapted from his podcast of the same name. In each essay he reviews a facet of our human-centered planet on a five-star scale, kind of like Yelp reviews. But unlike Yelp reviews, the subject is used as a jumping off point for him to tell a more personal story and offer his perspectives on being human. Some essays are autobiographical and can be quite heavy in subject matter, some lighthearted, but all endlessly thoughtful. While I quite enjoyed the humor, of which this book does not lack, I couldn't help but also get emotional reading some of his more reflective and touching essays. Some of my favorites are: Harvey, Auld Lang Syne, googling strangers, and Super Mario Kart.

This is a personal love letter to planet Earth, to celebrate humanity and the wonders of being alive on this rock.

What does it mean to live in a world where you have the power to end species by the thousands, but you can also be brought to your knees, or to your end, by a single strand of RNA? I have tried here to map some of the places where my little life brushes up against the big forces shaping contemporary human experience, but the only conclusion I can draw is a simple one: We are so small, and so frail, so gloriously and terrifyingly temporary. (p. 273) 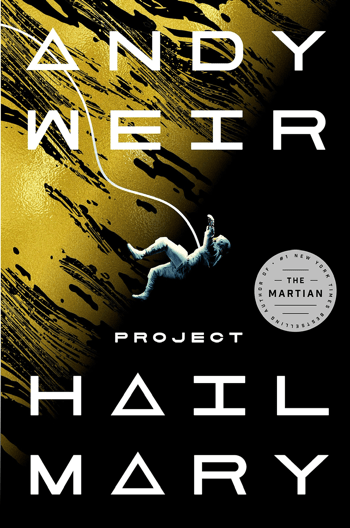 The Martian was such a fun read for me with all of the space and science nerdiness. I knew then that I had to keep an eye on Andy Weir. With Artemis, I opted to skip it due to lackluster reception. But after seeing so many rave reviews about Project Hail Mary, I figured I would give it a go.

Without spoiling too much, the premise of this book is that our protagonist woke up all by himself with amnesia on an interstellar mission to save humanity. What followed was a thrilling ride not unlike The Martian with incredible wit, humor, and such care into details any science and space nerd will surely appreciate. This novel puts the "science" of "science fiction" in the forefront and where there's fiction involved with the science, it's not too wacky or ridiculous that it took me out of the immersion of the story. My brain was willing to play along and remained engaged through to the end. This one is definitely a must-read if you enjoy a good sci-fi adventure.

Broadly speaking, the human brain is a collection of software hacks compiled into a single, somehow-functional unit. Each “feature” was added as a random mutation that solved some specific problem to increase our odds of survival.

If Then: How the Simulmatics Corporation Invented the Future by Jill Lepore (2020) 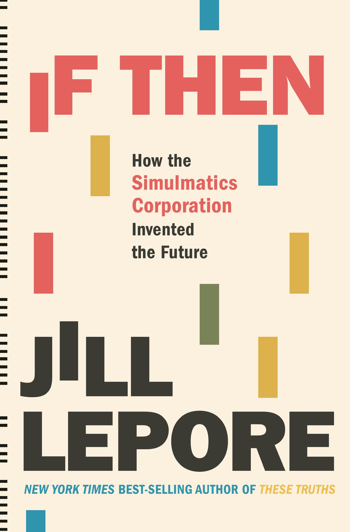 I've heard quite a bit about Jill Lepore, especially from her widely-acclaimed These Truths (which I still plan to pick up one of these days), but it wasn't until when I acquired a signed copy of her most recent book If Then that I finally got a taste of her writing. This book tells a story about the now-defunct Simulmatics Corporation and its mission to target and manipulate US voters and consumers using behavioral data and prediction algorithms. Sounds pretty familiar right? It wasn't Facebook or Google who pioneered these techniques we've all become so familiar with in recent years. Over half a century before Donald Trump with Facebook and Cambridge Analytica, there was John F. Kennedy with Simulmatics Corp., both men succeeding at the same audacious goal with the help of machines exploiting the same kinds of voter data.

This book wasn't originally going make my top list as I felt that large parts of it were quite dry and dragged on a bit too long with all the political details of the day and lives of men who I didn't particularly care about. I also wished that she had touched more on the technical details of the algorithms they used to do these predictions. But in the weeks since I finished this book, it has been stuck with me and I kept catching myself thinking back to it, especially the epilogue which I think was the strongest chapter. She draws parallels to what's happening now in the 21st century, and shows us that these hubristic ad men in the 60s were not all that dissimilar from tech execs in Silicon Valley today. This story also serves as a cautionary tale, reminding us that we've been through this before and that we shouldn't only just look forward to the future but to also look back at our history and not repeat the same mistakes again.

But the study of the human condition is not the same as the study of the spread of viruses and the density of clouds and the movement of the stars. Human nature does not follow laws like the law of gravity, and to believe that it does is to take an oath to a new religion. Predestination can be a dangerous gospel. The profit-motivated collection and use of data about human behavior, unregulated by any governmental body, has wreaked havoc on human societies, especially on the spheres in which Simulmatics engaged: politics, advertising, journalism, counterinsurgency, and race relations. Its rise also marked the near abandonment of humanistic knowledge. [...] The future was everything, the past nothing: a void, the humanities obsolete. Apollo reached the moon. Icarus reached the sun, and his wings did not melt. Instead, the light blinded him. (p. 324)