Naturally, this made me wonder what the figures are like in Thailand parliament.

From my research on the Thai National Assembly website, there are 78 women out of 489 MPs in the House of Representatives, making it 15.95% female. Note that this figure does include the first transgender MP elected to the Thai parliament, Tanwarin Sukkhapisit, but they actually identify as non-binary. I'm counting them in as the stat I'm looking for is about how male-dominated the parliament is.

On the Senate side — where senators are not elected but appointed by the military government — there are 26 women out of 250 senators, making it 10.4% female.

Thailand's House of Representatives is ranked 132nd (out of 188 countries) in terms of percentage of women in the lower chamber or unicameral parliaments. Within South East Asia, it comes in at 8th out of 11 countries, beating out just Malaysia, Myanmar, and Brunei. The irony is that a lot of Thais often look down on their neighboring countries such as Laos, Vietnam, Indonesia, and Cambodia as being less developed. 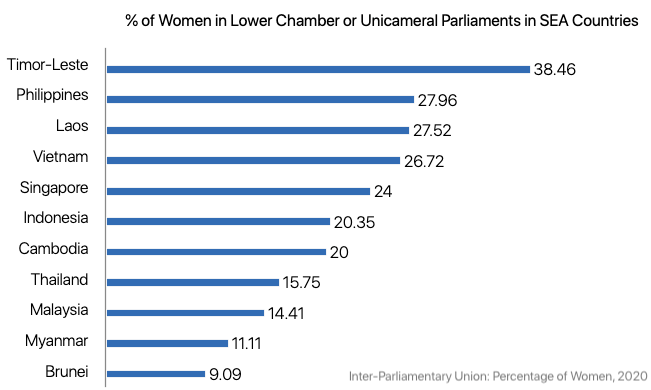 Needless to say, this is embarrassing for Thailand. But then what isn't embarrassing about this country's current political situation?