If you listen to Accidental Tech Podcast, you are probably aware of the running joke on the show about how incredibly long episodes covering Apple events usually are. During the most recent episode the hosts talked about how they were about to spend such a disproportionate amount of time discussing the Apple Podcasts announcement (which Tim Cook spent precisely one minute and quarter covering). That had me wondering about the exact ratios of time the guys typically spend talking about the event vs the event itself.

Unbeknownst to me, Apple in fact publishes their event videos with its own public RSS feed just like any other podcast. Now with the exciting realization that I won't have to manually comb through the archive of Apple media event videos, I whipped up a quick and dirty script to pull the duration data from the respective feeds and do the calculation for every ATP episode that covers an Apple event.1

So let's get the big question out of the way: which Apple event did they spend the most disproportionate amount of time discussing? That honor goes to the Mac event in November 2020. 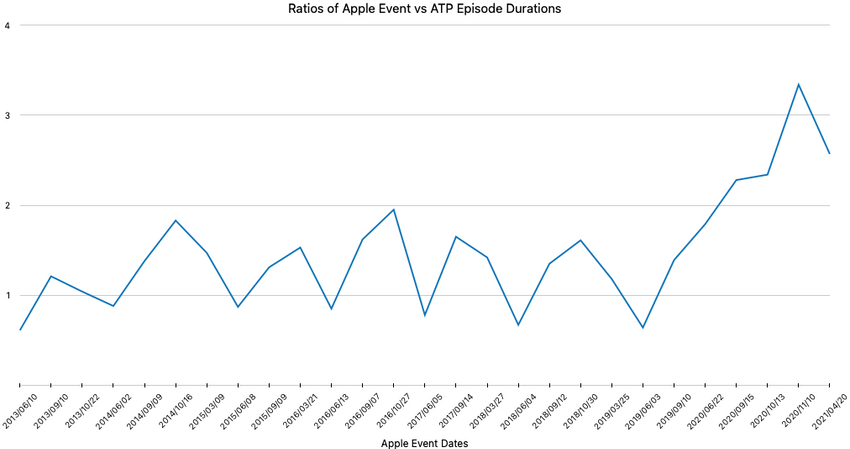 The event itself clocked in at just under 49 minutes2 and the ATP episode discussing this came in at 2h 43m 45s making the ratio 3.34. This means that for every minute of that event, the guys spent 3 minutes and 20 seconds discussing it. That really should not come as a huge surprise as this was the shortest event they have covered so far. Plus what's more exciting to talk about than the very first Macs for the ARM transition that all of us Apple nerds have been anticipating for years?

And funny enough, in second place is the most recent episode from this past week's event, with the ratio of 2.57 (2m 34s per minute). If you're curious and too lazy to look it up, they spent 43 minutes and 34 seconds talking about that minute-and-a-quarter podcast announcement alone. 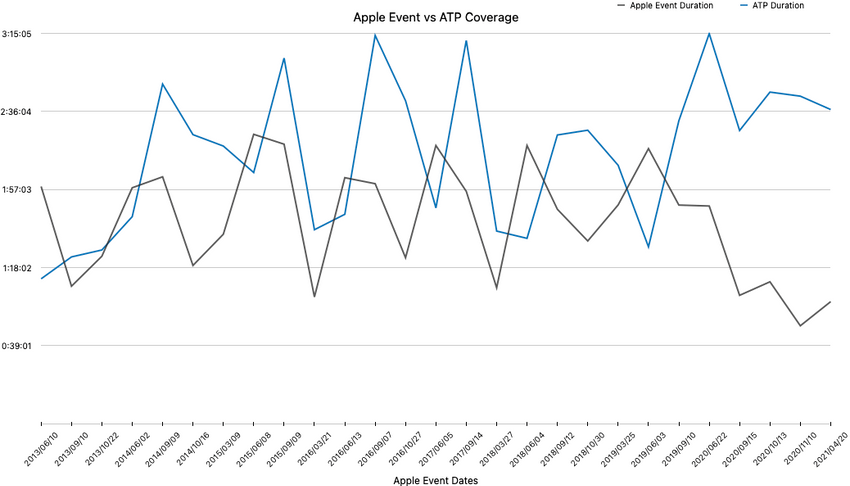 Now let's look at some stats for all of the events they have discussed on the show. From the very first Apple event they covered (the WWDC 2013 "can't innovate anymore my ass" keynote) to the most recent one this past week, there were 27 events in total. Those events average at 1h 41m 9s while ATP episodes come in at 2h 12m 5s. This results in the average ratio of 1.47 (1m 28s for every minute of the event).

Since the pandemic, Apple transitioned to doing their events entirely online with shorter-yet-still-packed pre-produced events. The pre-COVID number is 1.24 (1m 14s) and the pandemic-era number, starting with WWDC 2020, is 2.38 (2m 28s). These recent short events really did come loaded with tons of stuff to talk about.