A few months ago, after listening to a conversation between Myke Hurley and CGPGrey, I was inspired to start taking control of what is on my home screen, a screen that I literally see everyday. So I decided to give it a major overhaul.

Here is what I had before: 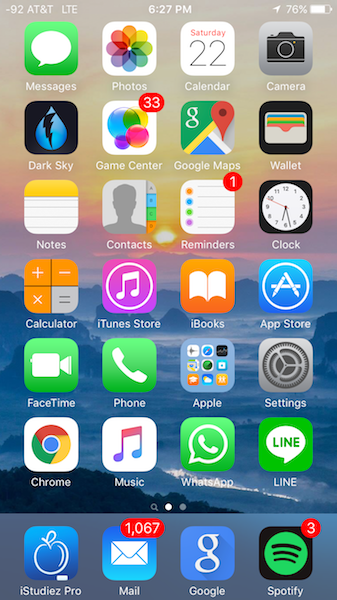 Cringing at the badge on the Mail app

And here is what I have now: 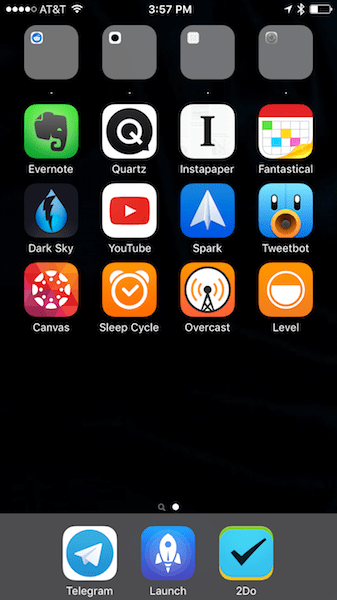 A much better sight to see

Of course I did not suddenly go from that original one to this within a day. This is the result of a few iterations spanning across several weeks involving tough decisions whether or not to keep an app on the home screen.

The process went something like this: First, I wanted to reduce the number of pages to only one page so it is easier to find apps I want. Second, I got rid of all the apps I never used but somehow just left it there because I could not bother to do anything about them. The first ones to go were Clock, Camera and Calculator apps, because I can quickly access them in the control center. Then I realized that I never (or rarely) touched iTunes Store, Game Center, Contacts, Phone, Wallet and iBooks. So they are gone too. After awhile, all the built-in apps were put into one folder. And long story short, it became what I have now.

I put three most important ones in the dock. Now the reason why it has only three has to do with the Launch Center Pro app. Since it is an app that contains all the actions I frequently perform on my phone (such as starting a timer, Google search, FaceTime or launching apps), similar to a folder, putting it in the middle of the dock right above the home button gives an impression of it expanding up into a secondary home screen. And it just looks nicer. The 2Do app is quite new to me, I have been searching for a decent to-do apps for a while. I tried the built-in Reminders, Things, Trello, Todoist and many others, but 2Do did it for me. Though I have been wanting to try OmniFocus, the price tag kind of scared me away. Then I have Telegram which is a free messaging app I found to be much faster and overall a more pleasant experience than WhatsApp.

This top row is purely influenced by CGPGrey’s. What he did is genius and I really love the aesthetic of it; everything is just looks nice and clean. It is pleasure to look at. Only having one app in the first page of each folder indicating what the folder is about made the title irrelevant, so they became just periods for simplicity (though I wish I can leave them blank). From left to right they are social, games, development and others.

Here are a few notable ones:

This has been a really nice change for the better. I can do frequent tasks faster especially with the help of Launch Center Pro. For those of you who are thinking of cleaning up your home screen but could not find time or the motivation to, I encourage you to take no more than an hour to do this. Trust me, it is worth it.